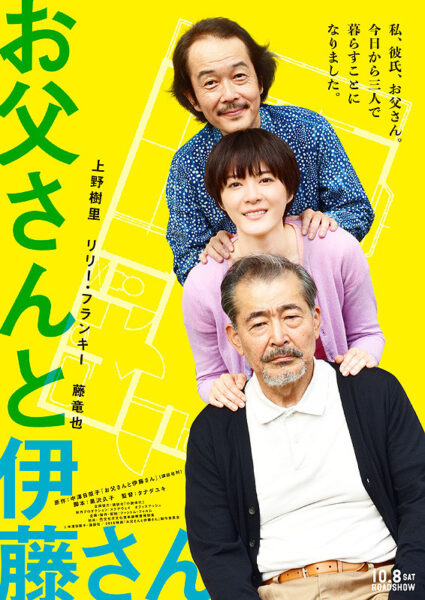 Me, my boyfriend and my dad.

Starting today, we’re all living together.

The morning of parting eventually comes

What future will they choose?

Juri Ueno portrays Aya, a young woman who has grown comfortable with living life at her own pace. Her  witty and laid back boyfirend, Mr. Ito, is played by Lily Franky while veteran actor, Tatsuya Fuji, takes on the role of Aya’s prickly yet strangely endearing father. The humorous banter between the three provide non-stop humor in a story that gradually builds toward an emotional climax. Giving subtle color to each character is established director, Yuki Tanada, who brings an incisive yet warm approach to the awkward relationship between an aging father and his straight-talking daughter in what amounts to a new type of “family” movie.

“I’m going to live with you and cover my expenses!”

Thrown out of his son’s home, an aging father has to turn elsewhere.

So he moves in with his daughter (Aya) and her 20-year elder boyfriend, Mr. Ito!

A father shows up at the home of his daughter, Aya, carrying a Boston bag, a mysterious small box and an intention to stay. The trouble begins right away with an argument at dinner over the best sauce to use on pork cutlets. And forget romance when your father is sleeping in the next room separated by a paper thin wall. Oddly, however Sunday afternoons evolve into the budding of friendship between Aya’s dad and Mr. Ito. While her father has a volatile temperament which explodes like a bomb on the quiet sedentary life of the couple, each day brings with humorous little incidents that begin to forge bonds among the trio. That is until Aya finds a note from her dad one day. “I’ll be gone for a while”, it reads and he disappears. Can three very disparate people come to find a happy equilibrium in a shared life? What is the real reason behind the dad’s sudden appearance, and disappearance?