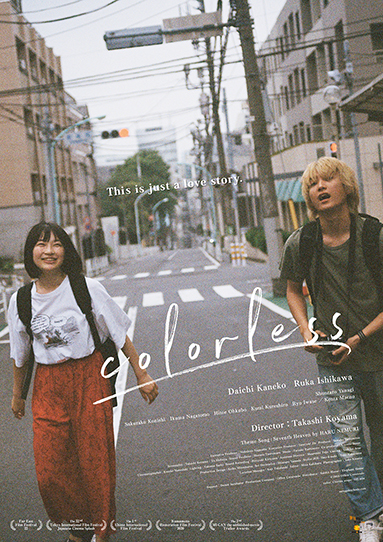 STORY: Shuji Oyamada (Daichi Kaneko) is a cameraman who has just gone independent after working as an assistant in a photo studio. As he goes to various publications to sell his work, magazine editor Akihiko Takamura (Kenta Maeno) gives it to him straight: “There’s no passion in your works. Have you ever actually been in love with someone before?” Instead, Takamura introduces him to a model, Yuka Tanaka (Ruka Ishikawa), who is looking for a cameraman who can take photos of her for Instagram.

When they meet in Shibuya, Yuka’s smiles seem fake, so Shuji tries to get her to relax by making small talk as they shoot. When he learns that Yuka is single, he invites her to his Sarugakucho apartment, under the pretext of checking the photos together. He asks Yuka to spend the night, promising that nothing will happen, but he comes onto her, and she cries. In the morning, Yuka has left the apartment, but Shuji checks her Instagram and sees that she has uploaded the photos he took.

Shuji had been following Yuka’s Instagram account, and when he sees that she has written that she wants to take a new profile picture, he springs on the chance and sends her a LINE message, saying that he’d like to take her photos. They manage to push through the photo session, and he once again invites her back to his place, but she dodges all his questions and part ways with nothing happening. However, Shuji’s photos of Yuka are well-received by the editor, and Shuji realizes that she is essential to him. On the Sarugaku bridge, Shuji tells Yuka his honest feelings about her, and Yuka responds: “People forget when they’ve loved someone, when they wanted to be with someone.” Shuji senses something sad in these words, and he tells her that he wants to photograph her more, that he can capture the real Yuka. She smiles at this, and accepts his proposal. From that day onward, Yuka becomes Shuji’s most beloved muse. Each time they meet, he is able to bring out Yuka’s various expressions as the shutter clicks. But Yuka never allows Shuji to come to her place. Shuji realizes that there is still some sort of invisible wall between them.

One day, an editor Shuji had met with before asks him to take on a job. But before he can go, Yuka suddenly appears at his door, crying. Though Shuji is trying to get to his job on time, Yuka hugs Shuji, saying, “Please, don’t leave me alone.” All of Shuji’s pent-up feelings come pouring out, and then the two of them sleep together for the first time.

Several days later, Shuji resolves to visit the apartment where Yuka lives, but he sees another man enter her apartment. He puts an ear to the door to hear what’s going on, and hears the fun laughter of a man and a woman inside. Shuji spends the whole night staking out Yuka’s apartment, and after he sees the man leave, he approaches Yuka and asks about the man. Yuka is startled at Shuji’s anger, and explains that he is her ex-boyfriend; they are living together until she can find a new place to live, nothing more. Yuka says that she loves Shuji now, but Shuji says that until she moves out of this apartment, he can’t trust her, and makes her start packing.

But unbeknownst to Shuji, there are countless lies hidden in Yuka’s words…